Right before I joined the Crimson Tide, my mind was consumed with anxiety and uncertainty. Coaching changes, as well as an unforeseen leg surgery, created some unsettling scenarios in my head.

Out of nowhere, I wasn’t sure anymore what my future in volleyball would look like. It was a tough time, to say the least.

Navigating these dark feelings became a daily challenge. And it took a big emotional toll on me.

But now, looking back at this phase of my life, I can definitely say that I came out stronger on the other side. And in this story, I want to talk about this journey.

So, let’s start from the beginning.

As a kid, I played every sport imaginable. The two I always loved the most were basketball and volleyball.

Basketball was the front runner for me from kindergarten all the way through middle school.

That didn’t change until I received an invite to join a club volleyball team. I was hesitant at first because my heart was more into basketball, you know?

But my mom was pushing me a bit to give it a shot. I think she was biased since she played college volleyball. Still, I took her advice and showed up.

And man, am I glad that I did.

I think the reason I started enjoying volleyball so much was because it fueled my competitive fire. I always felt like I had something to prove.

Most of the time, I was the youngest player on the court. And when you are, you need to have a chip on your shoulder. I was determined to beat everybody and make a name for myself.

In eighth grade, that growth resulted in a couple of scholarship offers. And it didn’t take me long before I had my eyes set on Alabama. There were just so many reasons that made Alabama the right school for me.

For starters, I knew I needed to be set for the future. I wanted to attend a school where I could get a great education and form valuable connections. And Alabama has connections just about everywhere.

Next is the fact that Alabama cares for their athletes unlike any other school in the country. They give us access to resources and facilities that are second to none. And when you leverage these resources, you put yourself in a position to reach a whole new level.

Just to give you an example…

Throughout most of high school, I was pretty tall and skinny. But now, having access to a top-of-the-line weight room, I’m doubtlessly in the best physical shape I’ve ever been in. And that translates really well on the court.

I always knew going to Alabama was the right decision for me, but as I briefly touched on in the opening paragraph, getting there would turn out a lot harder than I thought.

The Birth of Anxiety

Just two weeks before my commitment, Alabama informed me they’d be making some coaching changes, which meant the entire staff I had connected with wouldn’t be there for my freshman year. That was definitely an emotional time for me.

As a result, the fear of the new coach not wanting me on the team began to creep in. Who knew what her philosophy looked like and if she and I would connect on a similar level.

To make matters worse, I was dealing with a nagging leg injury. I didn’t know what kind of physical shape I’d be in for a new coach, and that made me feel uneasy. I hate disappointing people. A new coach who doesn’t know my past might not give me a chance.

I was so worried about not being ready and not being able to play for my team.

My sophomore year of high school, I began to experience some really painful shin splints. Eventually, a lump formed on the front of my leg, and it was thought to be just excessive swelling. Spoiler alert – it wasn’t.

This leg injury was one of the most mentally and physically draining things that has ever happened to me.

My sophomore year of high school, I began to experience some really painful shin splints. Eventually, a lump formed on the front of my leg, and it was thought to be just excessive swelling. Spoiler alert – it wasn’t.

Whenever I let my leg rest and took time off from sports, it would start healing and feeling better. Then, in-season, I could feel it just slowly deteriorate to the point where I could hardly walk by the end of it.

During my senior year, it was far more painful than ever. I knew something was wrong, and that it was worse than shin splints. But, I didn’t want to tell anyone or draw attention to it. I didn’t want to come across as weak or one to complain. Besides, I couldn’t abandon my team, right?

Eventually, my mom talked me into seeing a doctor. She told me, “If you’re going to play Division I volleyball for the next four years, you can’t be hurt.” And, as always, my mom was right.

So, we went to the doctor, and the x-ray revealed a fracture. We found out the lump was the bone trying to heal itself, and whenever a new season rolled around, I would re-fracture it. That’s what caused all the extra swelling.

Of course, I had to miss my senior season of club volleyball, which might’ve been worse than the injury.

It’s tough to watch your team play and not be able to contribute in any way on the court. Even during my rehab process, I did all I could to be there for them. But being in the stands is nowhere near as fun as being on the court.

At the end of the day though, I knew I needed to sit out and focus on getting my leg back to full strength. And there was no other way. 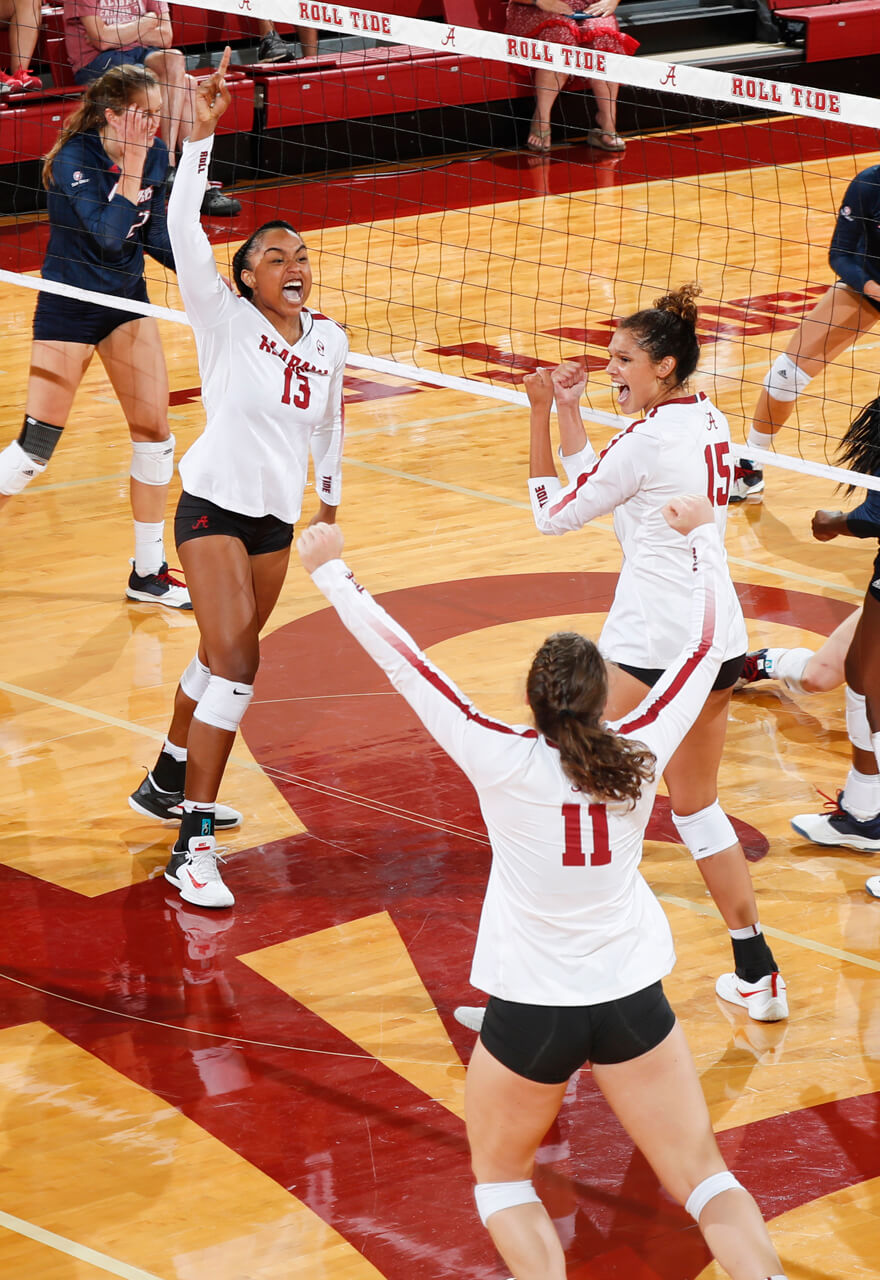 This January, right after I signed with Alabama, I ended up getting surgery with a tibial rod replacement.

Rehab was probably the hardest thing I’ve ever done in my life. Not because of the physical aspect, but because an injury like this can completely ruin your mental state.

The first real “athletic” thing I did during my process was when I played tennis with my boyfriend.

It wasn’t anything intense, obviously. Just a little bit of back and forth to work on my lateral movement. But early on, he hit a pretty routine ball at me slightly to my side. And my upper body went for it, but my lower body decided not to move, and the ball just flew by me.

“What’re you doing?” he asked.

And I responded with the truth, “I’m scared.”

He said: “If you can’t get past taking a step to the right, how are you expecting to jump in the next month?”

For the first and only time I’ll admit this in our relationship, he was right, and I was wrong. 😉

After that, I ended up moving around pretty well. It may sound like a simple thing, but that’s exactly what I needed to get over the mental hump of my rehab. I wasn’t going to sit around waiting anymore.

“I hope” was erased from my vocabulary. That day, it turned into “I will.”

I just needed to speak it into existence, you know?

And in July, six months after my surgery and when I arrived at Alabama, I was back on the volleyball court.

From my entire injury process, there was a lot of learning and self-reflection. Now, I play every game like it’s my last. You never know how healthy you will be next week. I’ve learned to make the most of every opportunity.

My recovery was also full of prayer. I had to trust in myself and trust that God has a plan for me. Because of that, I learned to be more confident in myself. Your identity is often defined by how you grow. And growth is exactly what I’m focused on now.

Overcoming my uncertainty has finally taken me to the point I’ve been waiting for – my first college volleyball season.

I am going to do whatever this team needs from me to continue our winning ways. Hopefully, our growth will allow us to finish high in the SEC. And who knows, maybe I’ll even bring home SEC Freshman of the Year.

As stressful as my signing period and rehab process was, I’m grateful that it happened. It surely taught me a lot about perspective and perseverance.

And now that I got this out of the way, let’s play some volleyball.