My Turn Behind The Camera

Soccer at the University of Alabama has given me the best of two worlds.

On one hand, I’ve shared the field of battle with an incredible team within one of the nation’s surging programs, and on the other, my taste of sports competition has spilled over into the media room, where I’ve gone from interview subject to interviewer.

I’m always going to love being in front of the camera and the stories being about my team, but a future job in media would be a really good second when my student-athlete days are over.

It’s an opportunity to shine the light on others by bringing their stories to life.

And as I’ve experienced the ups and downs as a student-athlete myself, I like to think I’m well-equipped to do just that. 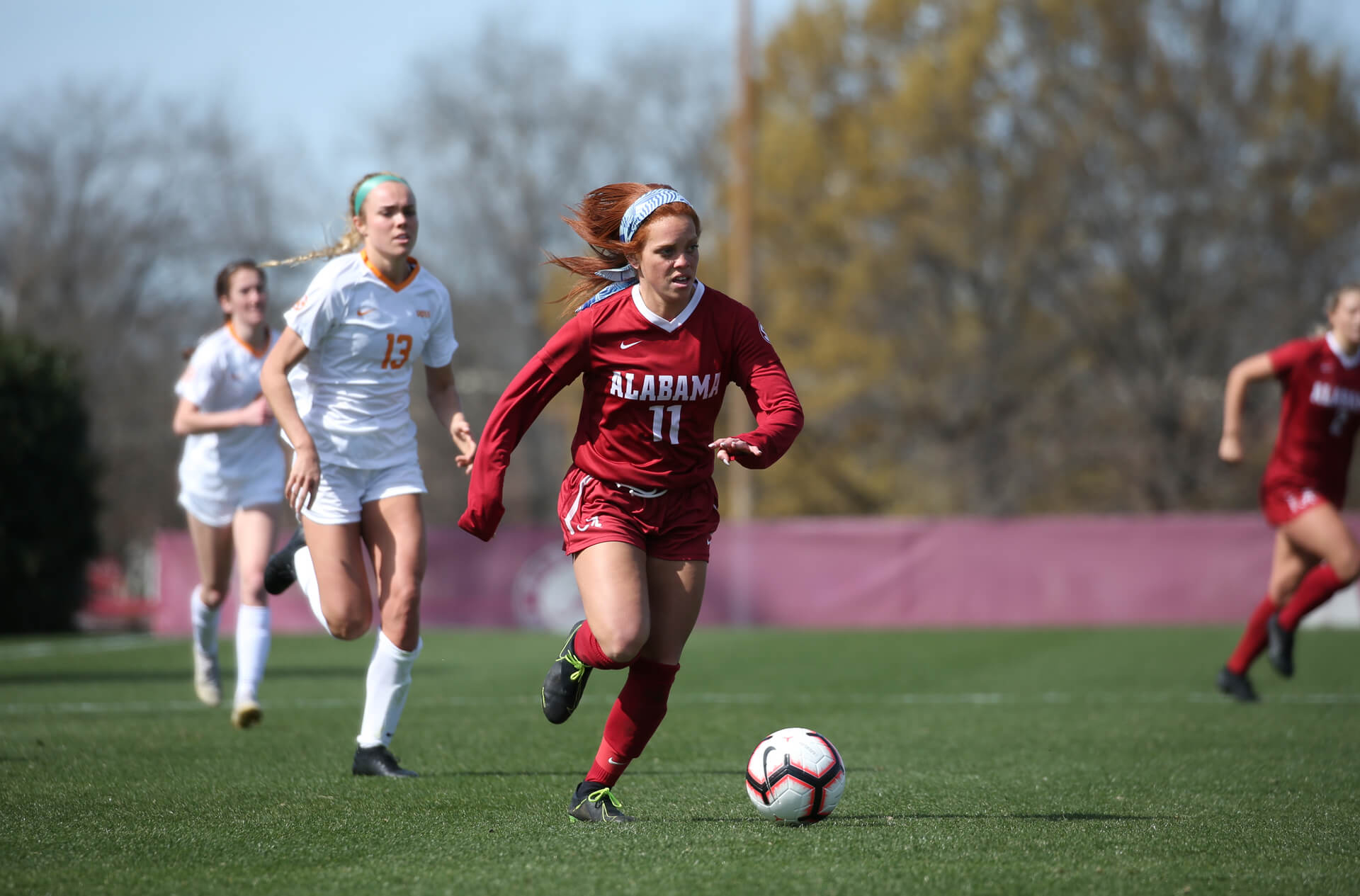 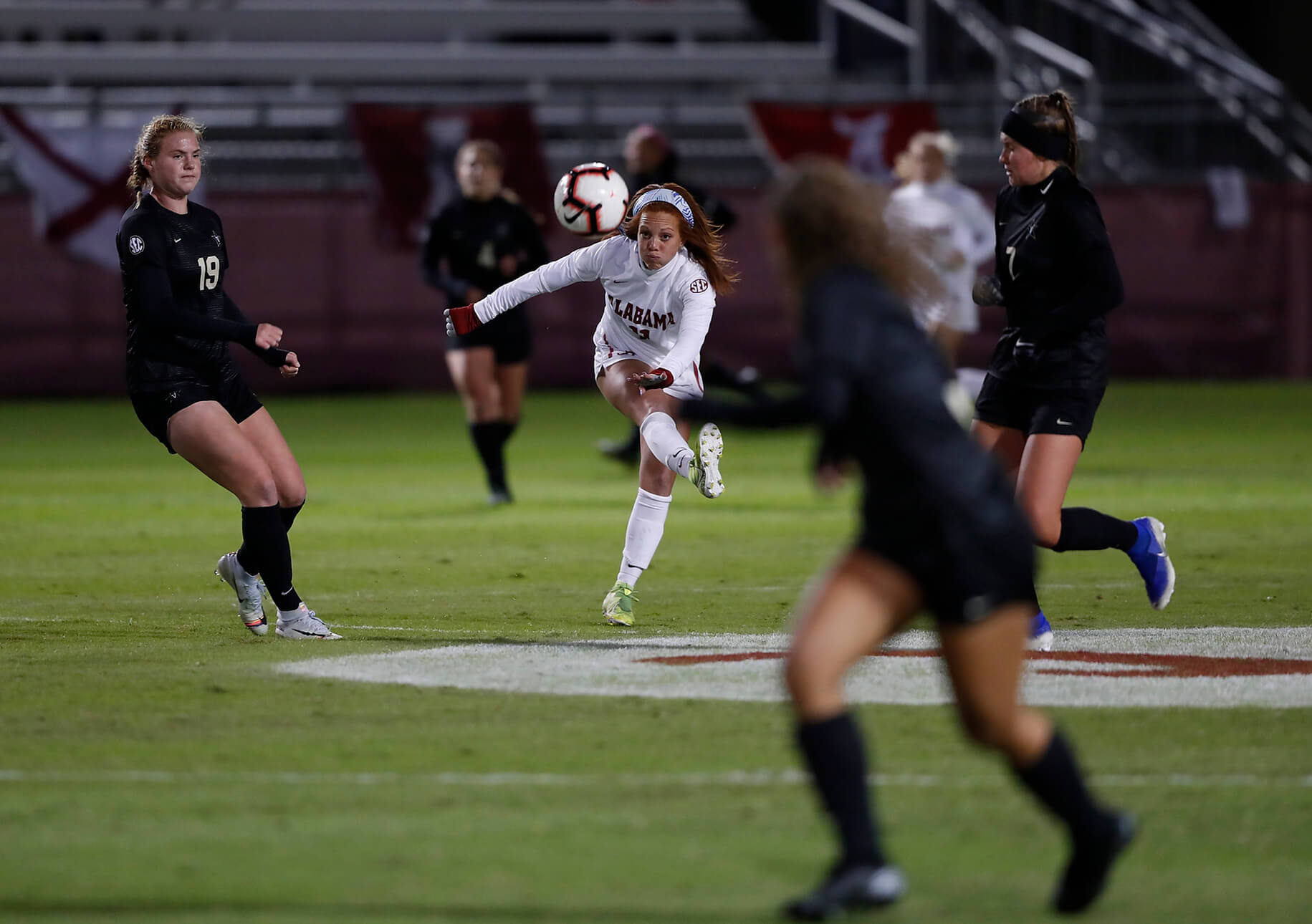 My journey towards becoming a student-athlete goes back as far as I can remember. Soccer is the Holy Grail of sports in my family.

Both of my brothers have been playing since I was born, and my stepdad works as a North American scout for the Manchester United English Premier League team.

It was only natural that I fell for the sport as well.

I just loved the idea of being outside and competing. Not to mention the recent boom in popularity in women’s soccer all over the world.

That continued growth and players turning into role models for younger girls is really exciting. Regardless of the capacity, I wanted to be a part of that movement.

That hope put me on the path to college athletics.

Playing at a collegiate level has always been my personal dream and an actual goal since middle school.

My brothers both played college soccer, and I had an opportunity to see them look at schools and go on college recruiting trips.

So it wasn’t long before the wheels started turning in my head, and I wanted to see for myself how far I could take my game.

All I knew at that point was that I wanted to go to an SEC school or somewhere with hot weather.

I made the Alabama connection since I was actually born in Birmingham.

Even after verbally committing to former Alabama soccer coach Todd Bramble, I still decided to stick around after he left and made the school my new home.

I loved everything about the soccer program. Coach Wes Hart came and really rolled up his sleeves in an effort to rebuild things.

The chance to play for him, while also attending an amazing school, was all I could ask for in truly one of the most multi-faceted colleges in the country. It’s the perfect school that offers a little bit of everything.

It’s big on athletics and great academically. There are no shortages on clubs and sororities either. And the social aspects of the school made signing there a no-brainer.

And it didn’t take long after signing to make for some memorable moments.

In my freshman year, we made school history by qualifying for the NCAAs and defeated one of the top three programs in the country.

I think it became a turning point for the Alabama soccer program. And having been a part of this experience turned this moment into arguably my favorite soccer one to-date.

But obviously, right now, nothing is certain. Everything is at a standstill due to the Coronavirus pandemic.

A Shift In Personal Goals

Along with succeeding on the soccer field, I’ve also been pushing myself to succeed in the classroom.

While my family helped me find soccer, I ventured out and developed a passion for media work all on my own.

I even interned at the Tuscaloosa News.

The opportunity to cover sports would be the perfect transition for me because it’ll keep me involved in the things I love after graduation.

Something that has especially helped with my success has been my comfort with the athletics teams at Alabama.

You could literally throw me in with any team, and I think I’d be able to talk to them just because of my experience as a student-athlete.

I’d love to work with the SEC someday and do something to help maximize the college experience for student-athletes. That’s something that interests me when I do eventually find a job.

But obviously, right now, nothing is certain. Everything is at a standstill due to the Coronavirus pandemic.

When the news broke, I couldn’t believe how quickly things shut down.

Our coach called a meeting on the Friday before Spring Break and had everyone collect their belongings. There was no certainty we’d even be allowed to return back to school after the break.

It was all just kind of scary, to be honest.

It was also very sad, considering it was the last spring for me and the rest of the seniors.

I wasn’t too bitter about not having to run laps again, but we missed out on the kind of stuff you can’t really get back—the games, experiences, and creating new memories.

The pandemic also put an indefinite hold on many of my media aspirations.

There are no sports right now, and that’s putting a damper on everything I’ve been working towards.

No one for me to interview, take pictures of, and that kind of stuff—it was all taken away from me, just like soccer.

My internship with the Tuscaloosa News actually ended when we went to online school.

It was really crushing for me because it was something I looked forward to every week.

We were supposed to host the softball tournament, and I was excited about getting an opportunity to help with that.

A Bond Created For Eternity

I know that I won’t let the recent state of affairs destroy my dreams, though. I’ve worked too hard to simply throw in the towel and walk away.

My family, friends, and teammates have continued to support and encourage me every step of the way.

Even in quarantine, my team still does weekly Zoom calls in an effort to check in on one another.

In a strange way, I’d say the pandemic has brought us all closer together.

We are all in contact practically every single day. Even our coaches make sure to call in to check and see how everyone is doing.

It’s a big reason why the team has been so successful, and why I absolutely love being a part of it.

Whatever happens, I can’t wait to continue to watch this program grow and excel. And who knows, maybe one day I’ll be the one reporting on it.